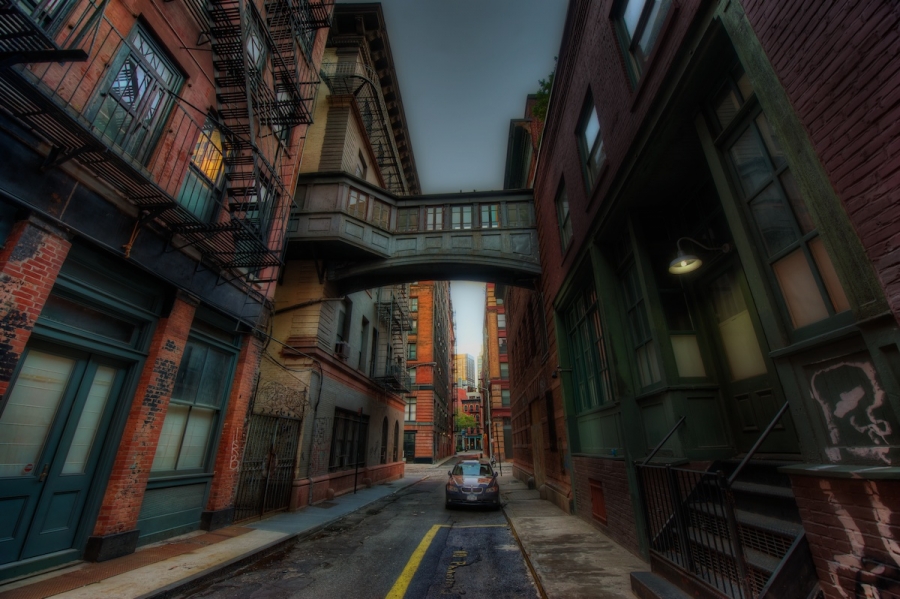 Manhattan is the big city, but it is also small enough that if you do a lot of exploring, probably as a young adult, you can start to wonder how close you are to having been on every block.  You might start to mentally catalog the neighborhoods where you know you have gaps, but you probably will not implement a plan to make sure you have covered every block, for two reasons.  First, you do not have an obsessive personality, and second, there is simply no way to know with certainty which blocks you have already covered when you start.

Nevertheless, every now and then, you step on to a street or block in the city and just know, “I have never been here before.”  That’s how I felt when I was on a photo shoot in Tribeca and turned into Staple Street.  According to the linked article, the pedestrian walkway was built by New York Hospital, to connect its downtown clinic, called the House of Relief, with an annex.  That walkway, plus the short length of the street and its narrow width, were what made me so certain that I had never been here before, and they were also the exact same reasons I was glad I discovered it with my camera gear with me.

This shot was taken early on a Sunday morning.  Despite the streets being nearly deserted, I had to stop shooting my brackets 2-3 times because  a woman walking her dog decided to stop directly in the intersection that you see ahead.  She would move, and then come back. I think the dog was in control.

In processing, I wanted to maintain the shadows on the right side of the picture.  The camera is facing south, and the morning sun is coming from the east over the buildings on the right.  The wall of buildings on the left had considerably more light.  In Photomatix, when I processed the HDR, I kept most of the shadows in the whole picture.  Then in Photoshop, I applied the Lucis Pro filter in a sparate layer.  Lucis Pro reveals shadows and appears to add light and detail to hidden recesses in a photo.  I applied it to the main image using a big brush on one side of the image, leaving the right side intact with its deep shadows and single, weak lamp.