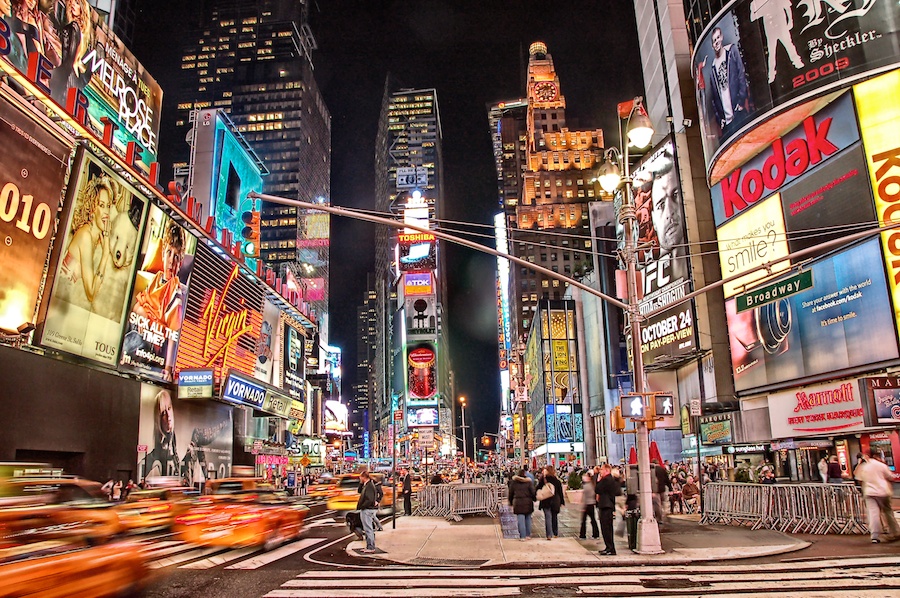 UPDATE: March 18, 2010: I am proud to announce that this photo won Honorable Mention in the Nikonians 10th Anniversary Photo Contest first round.

Trey Ratcliff’s famous HDR tutorial uses a photo of Times Square at night as its example.  So it is very tempting, when one starts working through the tutorial and making your own HDR images, to create your own Times Square version. On page 2 of the tutorial, Trey even says:

Everyone shoots Times Square in New York. Everyone. Professionals, tourists, teenagers with grainy cell phone cameras, etc. Think about it and name your worldwide location: Paris, New York, Shanghai – these places are filled with thousands of photographers, many of them very very good, with incredible equipment and great training. YET, it is still quite difficult to get an “original” shot. You end up with just about the same shot that everyone or anyone else can get.

For me, doing so was pretty much a given, especially because I work about 3 blocks from where the above shot was taken. I did manage to alter my shot from Trey’s famous photo, by taking it about 2 blocks north of where he shot his image. Other than that, however, it is clearly a work inspired by his original.
Oddly, however, I strayed pretty far from his tutorial in making this. I did shoot a bracketed set of 3 images at +-2 EV, but trying to run them through Photomatix yielded very disappointing results. Instead, I started with the +2 version as my base, then used masks and layers to manually tonemap dark and light areas. I did run the single image result through Photomatix to soften the edges on what I created, and also finished with Lucis Pro to add some pop.  It is also worth noting that Times Square is so bright, even at night, that you can shoot at a low ISO at a reasonable shutter/aperture combination, so there is little noise to correct compared to most other night shots.