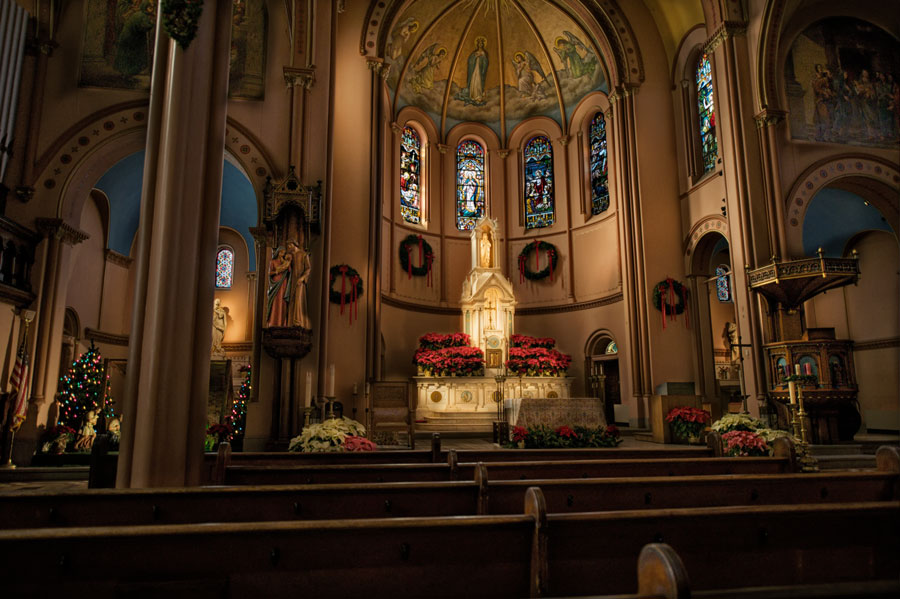 This one took a lot of work, but it was a labor of love.  This is the altar of the church of my youth, Immaculate Conception Church in Yonkers, NY.  Unofficially but universally, the Church is known as St. Mary’s.  It is a large, beautiful church.

The photo took a lot of work for a few reasons.  First, I did not have a tripod.  Second, I should have taken at least a 7 shot bracketed set to cover all of the range of light needed, but I only took 5.  Third, my usual HDR program, Photomatix, did a terrible job of rendering the HDR image.  It introduced a lot of noise, much more than the ISO of 2000 would have suggested, and the colors never seemed right.  The HDR processing built into Photoshop CS4 also failed to produce a satisfactory result.

Fortunately, the folks over at The Windy Pixel mentioned another useful HDR program called Bracketeer in a post from 2 days ago (the same day this image was shot).  I gave it a chance, and it produced much better results.  Even then, I had to manually mix in separate parts from different exposures to get all of the elements to show correctly, using an adjusted version of the lowest exposure to show the stained glass windows, and a similarly adjusted version of the brightest exposure for the darkest elements, such as the murals in the top right of the image.  I gave it all a light application of Lucis Pro and some noise reduction for the final result.

As it happens, today is the Solemnity of Mary in the Catholic Church.  God Bless you, and Happy New Year to everyone.