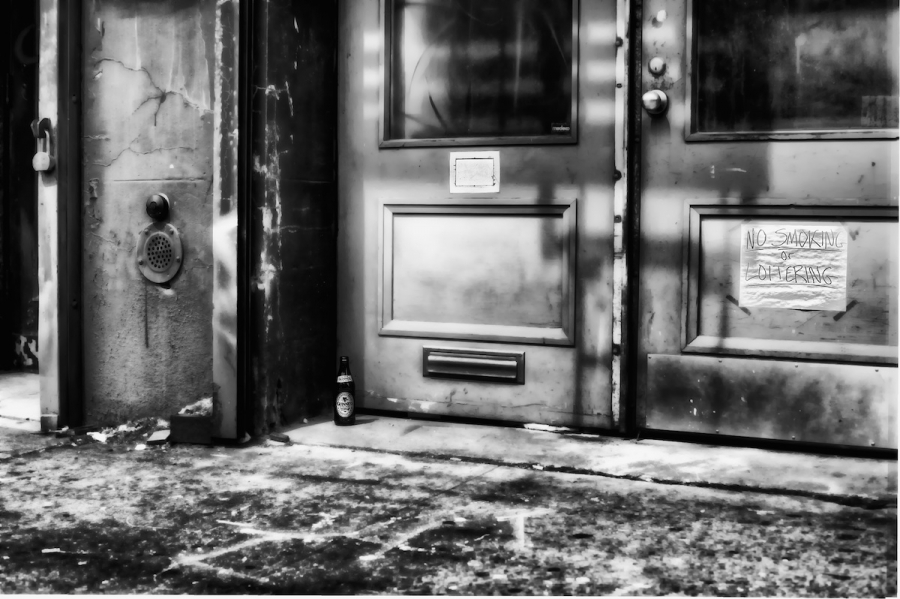 So as I mentioned in yesterday’s post, I’m skipping the usual Saturday installment of Bus Stop Friday in order to re-align the numbering of both the Bus Stops and Crosswalks series. To fill today’s space, I’m fulfilling a request made by my photo friend Timo for a black and white version of this image.

The day I posted the color version was extremely busy for me, so I had no time to write.  I was on a photo walk when I noticed the beer bottle in the corner of the doorway.  As I knelt down to capture the shot, however, I realized that its scale was so small, even when I only captured the lower portion of the doors.  I didn’t think it would be much of an image for a moment, but I prepared to fire off some hand held brackets anyway and decide later.  Then I noticed the sign, and figured I did have something there after all.

Some Notes on Field Composition

I think I spend a lot less time composing in the field than a lot of my photographer friends do.  It’s all done on the fly, and quickly.  If I spend more than 10 seconds looking through the eyepiece I get bored.  I do spend a lot of time thinking about composition when I’m not taking pictures, and I think a lot of my thoughts are internalized and sit just below conscious level.  There are lots of times when I capture elements of a photo aligned just so, and I’m quite literally surprised at it when I load the image on my computer.  To be clear, my point is not that I have some inherent skill, but rather that the time I send thinking about composition when I’m not in the field gets so ingrained in my head that I end up working on a quick, intuitive way when I am in the field.   This mirrors how I work in other areas of my life – when I write something for work I often do most of the composing away from my desk and computer, so that when I do start typing it often feels like I’m taking dictation from myself.  My point, if there is one, is to figure out how you work and proceed accordingly.  Figure out a method that works for you and run with it.