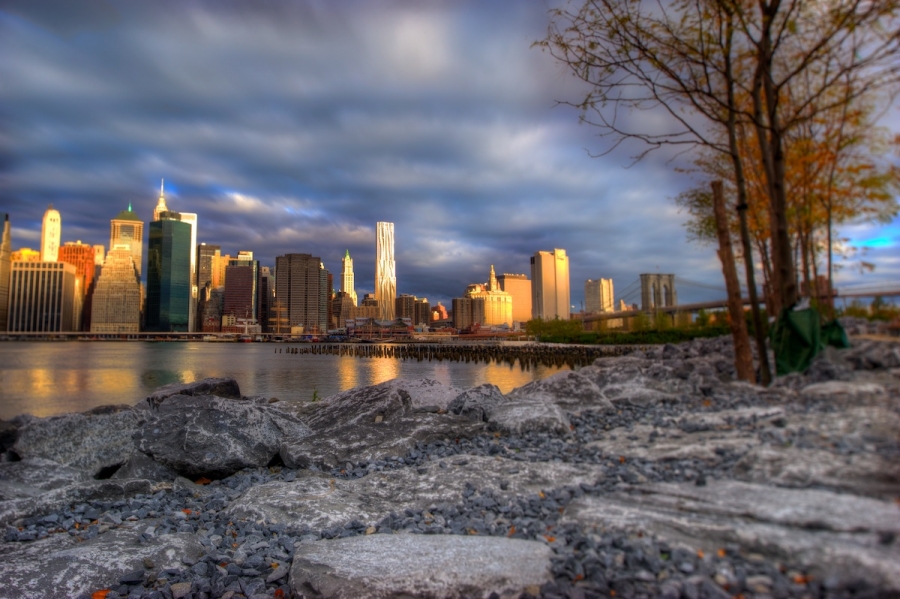 Yesterday morning I went down to Brooklyn Bridge Park with my friend Jon, who needs to get back to taking more pictures regularly.  The city recently opened a large new section of the park between Piers 1 and 6.  Because this area has only been open about a month and a half, we had a chance to photograph the lower Manhattan skyline, one of the most photographed subjects in the world, from a perspective that is still somewhat new.  We spent most of our time on Pier 1, but walked a bit down towards Atlantic Avenue.  This spot is between Piers 1 and 2.  While walking back I saw these neat looking rocks. I splayed out the tripod legs real low, lay down on the ground, and set up the shot.  I guess there is kind of a decent background too.  What do you think?

I processed this using the OnOne Software Photo Tools assortment of filters.  I usually use Nik, but I wanted to delve more into the OnOne set.  I bought the entire OnOne Suite earlier this year when they had a huge sale, but mostly just  wanted and used the Focal Point member of the suite since then.  Photo Tools is roughly analogous to Nik’s Color Efex software.  Until now I have found Nik easier to use, but to be fair, I have not really given OnOne much of a chance.  After I use it a bit more I might write up a comparison.

The glistening silver building in the middle is a new Frank Gehry tower.  I do not know it’s name, but I think it is a residential building that was significantly scaled down when the real estate boom burst.  Even somewhat diminished, it is the dominant figure in this area of the skyline, somewhat replacing the Twin Towers. [UPDATE: my twitter photography friend Chris Stern pointed out that this is the Beekman Towers.  It also appears to be a full 76 stories, and not diminished, so the story I read indicating that was going to happen turned out to be wrong.  Chris’s very nice black and white photo of the towers is here.]

I used to live very near here about 18-20 years ago.  The Brooklyn Bridge and lower Manhattan skyline with the Twin towers were my view from  a slightly different perspective.

I still miss the Twin Towers.