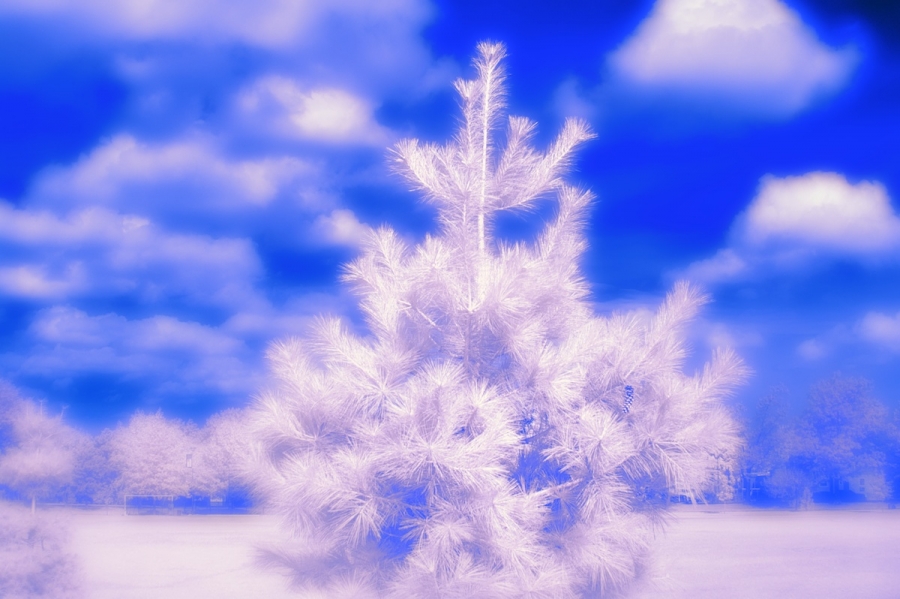 Over the summer I processed a few images using a false infrared filter applied in post.  Both Nik’s Silver Efex and Color Efex have such filters.  I liked the results, but wanted to try real infrared.  The best solution is film, theoretically, but it has major impediments these days.  Some of the best infrared films have been discontinued, and here are few options for processing.  All infrared films require extremely special care and handling.  Even loading a camera is a pain, because any light leakage into the film will destroy it.

Trying to shoot infrared with a regular digital camera is even harder.  Almost all digital cameras except some of the oldest models have been set up internally to block or ignore infrared light.  So even if you shoot with a special filter that absorbs all regular light you have to make ridiculously long exposures just to let enough infrared through to create an image.

Then a few weeks ago I noticed a Brian Matiash tweet indicating that he just received a camera back from Digital Silver Imaging which performed a digital infrared conversion on one of his old cameras.  So I looked into it, and decided to convert a Nikon D40 that was not getting much use. I opted for the 665nm conversion, which is best for infrared color images.  It generates images with a strong red color, although they are also suitable for black and white conversion.

But that’s not all you can do.  Digital Silver Images sent me an information sheet with some instructions for converting the red images to blue. It suggested using a Photoshop action to effect the conversion, but there does not seem to be such an action in Photoshop.  So I figured out it involved swapping the red and blue color channels, and was about to create an action myself, but then I did some googling and found a ready-made action free for the download at this page at khromagery.  You need to do some more work after the conversion, and I do not have that perfected yet, but I’m working on it.

By the way, Brian Matiash’s second infrared image is here.  He seems to have managed to get a better red tone than I have so far.  I have also made some black and white infrared shots that I am very pleased with, but I am saving some of them for a bit closer to Halloween.

This is just a tree in a park in my neigborhood, with dreamy clouds in the background.  Organic greens emit a ton of infrared light, which is why they appear white in most infrared images.