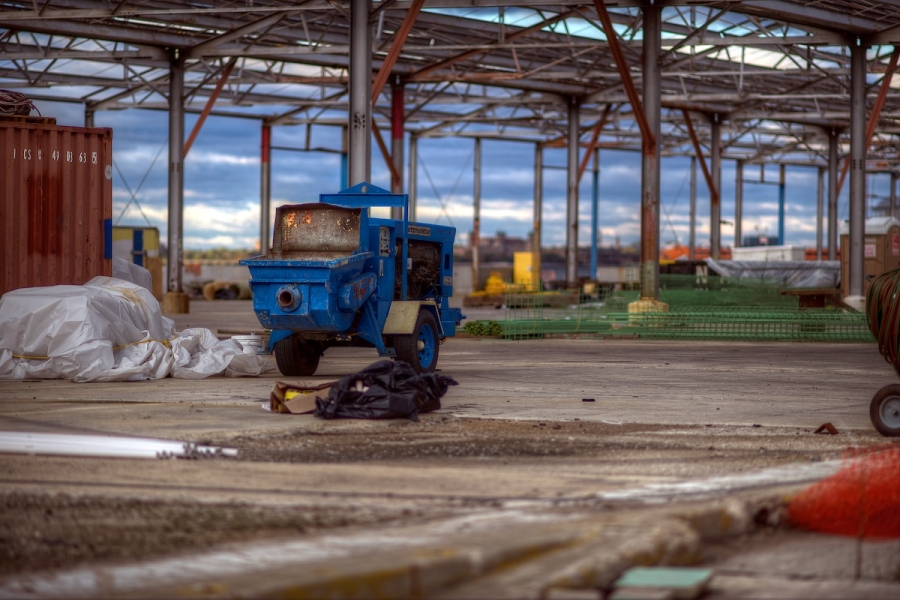 If you think the title is a reference to President Obama’s 2008 campaign slogan, then you probably have not had young children in the last 10-15 years, because this piece of construction equipment, with its small size and rich color, definitely reminded me of Bob the Builder and his friends.  Even the way its lid is open makes it look ready, willing and earnest, just like Bob’s crew. Besides, if I didn’t call this “Yes We Can” I would have been tempted to name this after the equipment manufacturer, the delightfully named Putzmeister.

This is from a pier at Brooklyn Bridge Park that is under construction.  For some particular shots, I had my 135mm f/2 lens on the camera, which was also off the tripod.  So this was 5 shots handheld.  Photomatix did a nice job of aligning the images, which pleased me, because sometimes it has difficulty handling detailed lattice patterns. It probably helps that much of the metal framework is out of focus due to the small depth of field.  I think pure depth of field bokeh, as distinguished from tilt-shift bokeh, is an underused technique in most HDR images.

Finally, I continued experimenting with OnOne Photo Tools for the processing: I brushed in more saturation to the main feature, then added additional filters for Auto-Tone and color, and Detail.  Finally, I added a slight crop in Aperture, which was necessary to fix he rough edges due to the merging of 5 hand held images.

What They Needed Was Someone To Take Their Picture. Oh, Wait.