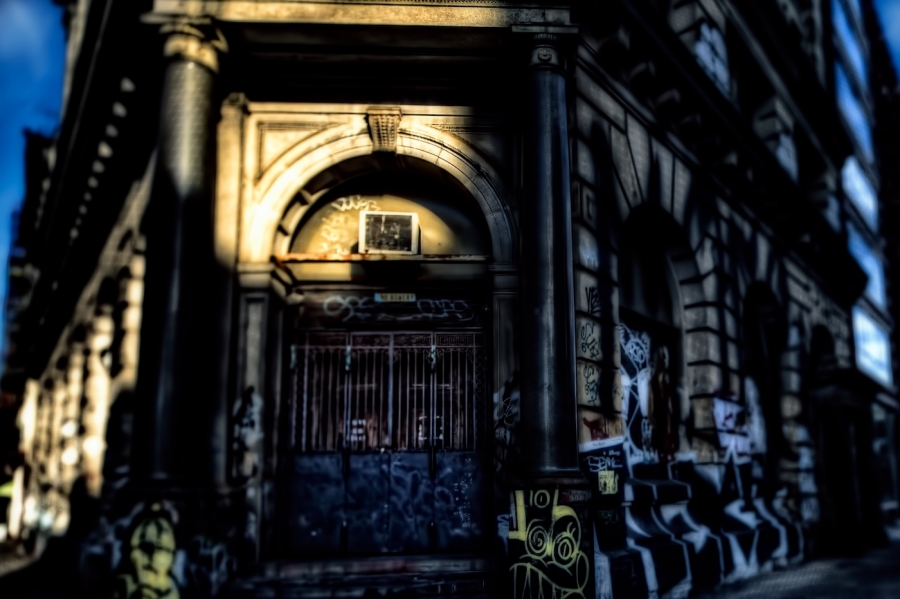 Lovely contrast between yesterday’s image and today, don’t you think?  This is 190 Bowery, and despite the Bowery’s reputation, today  you are just as likely to walk past a high end wine shop or an expensive condominium as you are a derelict building like this one.

But here is the kicker, and it is a perfect example of why I love doing this. When I plugged 190 Bowery into Google, I discovered that the building is not abandoned. In fact, a photographer lives there.  Specifically, New York photographer Jay Maisel lives there with his family in what this article describes as a “six-story, 72-room, 35,000-square-foot (depending on how you measure) single-family home.”  Apparently he bought the building, which originally housed the Germania Bank, in 1966 for $102,000. According to the same article, the building and land is worth tens of millions today (note the article was written just as the financial real estate bubble was about to burst – regardless, the building has high value).

I love this. I never would learn cool stuff like this if I weren’t taking the photos and researching the locations.

As for the image, I applied treatment upon treatment while processing it: Nik Color Efex, Topaz Adjust, Topaz Detail, Nik Silver Efex Pro, and the new version of OnOne Photo Tools. In many instances I painted in individual effects to selected portions of the image.  In the OnOne suite, I used one of Brian Matiash’s HDR presets for the first time – I believe it was the one named after Bob Lussier. You need to be careful when you get in the mode of piling one processing filter or effect on top of another. It could mean you have no clear vision and have no idea when to say, “enough; it’s done.” But it can also mean that each effect suggests the next, judiciously applied. That is how it felt last night, and it helped that I was applying most effects selectively with the brush instead of to the entire image.