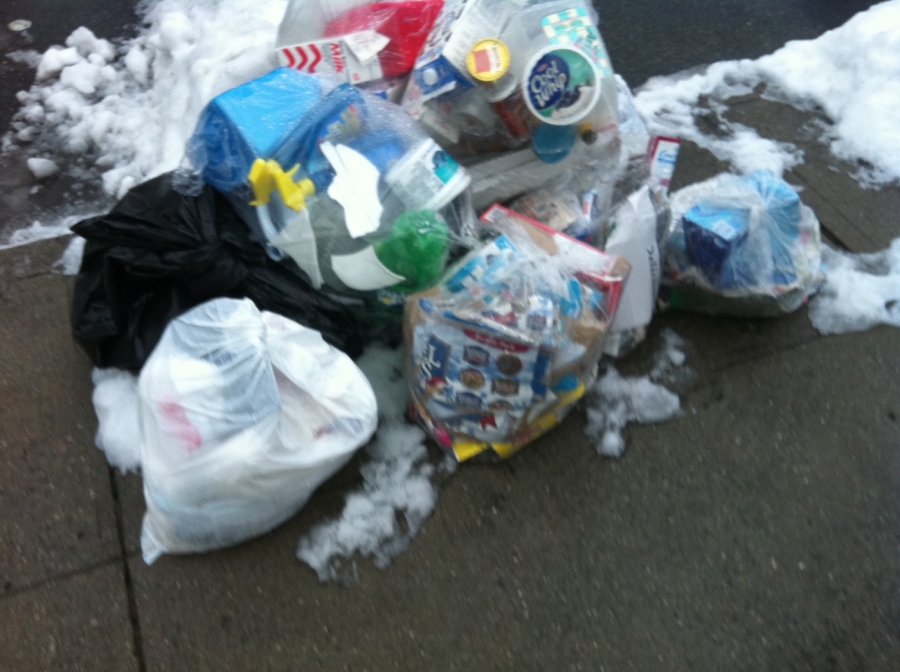 Please indulge me with this unappealing diversion from this blog’s usual fare. I will post a more pleasing image shortly so this will not remain at the top of the blog. But this needs to be documented.

New York City had a snow storm on Christmas, which the NYC sanitation department completely bungled. They came under a lot of criticism for it, but to make matters worse, they have now used that as an excuse not to do their main job, which is to pick up trash and recycling.

My neighborhood of Middle Village is represented by Council member Elizabeth Crowley, and she has been completely ineffectual in getting pick up service for our neighborhood. The pictures you see here are all outside single family homes. They were taken yesterday morning. As of this morning, nothing had changed.

When you call Elizabeth Crowley’s office they seem very proud of all the work they have put in to get sanitation service for her constituents. But when you point out that the work they have done has not been effective, they have no good response. They confuse being busy and being active with accomplishing something.

Again, I apologize to my usual followers for this entry, which I’m sure none of you care about. But the local news media has ignored this. Once the streets were plowed they lost interest.

UPDATE: I received a follow up telephone call from the person in Council Member Crowley’s office who represented herself as the person responsible for sanitation issues. The ensuing conversation was preposterous.

First she tried to assure me that she and the office were on top of everything. After I recounted for her the lack of pick ups I mentioned above, she confided in me that she had been calling the local sanitation garage every day for the past few weeks and they gave her assurances but it wasn’t changing anything. I think she expected sympathy. Instead, I pointed out that she basically admitted to being ineffectual.

If all she can do is make phone calls that accomplish nothing, I’m not sure why we need to pay her. Council Member Elizabeth Crowley can have a smaller staff and smaller budget, given that her current staff does not get results.

Then I changed the subject to sanitation budgeting. I mentioned that in the 9 years of the Bloomberg administration the sanitation budget had skyrocketed from $1.3 billion annually to $2.1 billion, yet we had fewer sanitation workers and poor service. I asked where the money was going, and it was clear that she had no idea. I stated that this was unacceptable for the sanitation expert in the office, and she again sought sympathy by confiding, this time by stating that she was new.

At this point, I was sympathetic to her, but not to her boss. So I tried to be gentle while making the following points that sadly, need to be public. I explained to her that she had again admitted her ineffectiveness, as she was using her new status as an excuse for being ill-informed. I explained that even though this was not my job, I knew about this budget issue simply by reading the paper. I told her that her boss needs to be replaced, because her boss had seen fit to respond to the worst service crisis in NYC in 40 years (the blizzard that nearly destroyed Mayor Lindsay’s career), by appointing an inexperienced person to handle that issue.

Elizabeth Crowley has failed her constituents and needs to be replaced at her next election.

SECOND UPDATE FRIDAY JANUARY 21: Four separate computers from the domain for the United States House of Representatives viewed this blog entry yesterday. I don’t know why they are interested in this local issue, and I don’t think they can help me get my garbage picked up, but that’s still pretty cool.