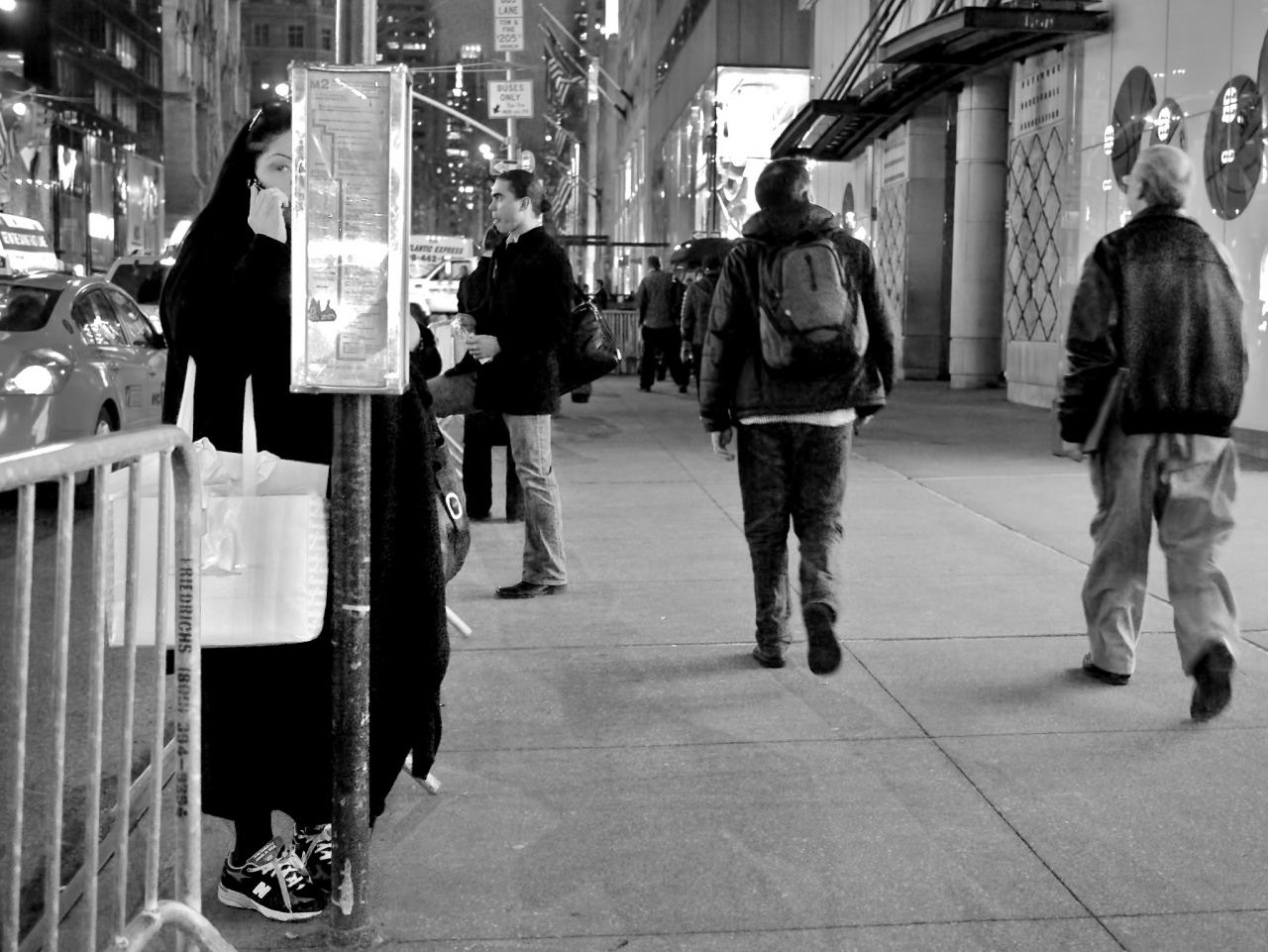 I took my first Bus Stop and Crosswalk shots on March 1, 2010.  I had a new 85mm f/1.4 lens and wanted to see how well it performed at night. That was my only goal. I also had an idea to walk up to a street about a half mile from my office that I knew had a pipe venting steam from below ground into the air, and I wanted to get a shot with that in it. That particular shot never really came out the way I wanted, but on the way there I kept on testing the lens.

The people standing at bus stops were standing still. So were the people waiting for the light to change at the edge of a crosswalk. Both groups of people had a certain air of interest, the sort of private moments in public spaces that makes street photography so rewarding.  I came up the idea for a series that night, and worked out details over the next few days.

I posted the first Bus Stop image on March 5, and the first Crosswalk on March 9.  On April 9 I announced that I would double my output and post 2 bus stop and 2 crosswalk shots each week.  In the past year I sometimes pulled back to one of each in some weeks, but always posted a Crosswalk every Tuesday and a Bus Stop every Friday.

April 8, 2010, the day before, was also the last time I failed to post at least one image here, meaning I have now gone 365 days of posting daily images. I didn’t even plan the coordination of the milestone with the anniversary. It just worked out.

Finally, don’t forget that to celebrate Crosswalk 100, Bus Stop 100, and 365 days of consecutively posting at least one image daily with my fans, visitors, and supporters, I’m going to give away either a print or a book to one person randomly chosen from among those who have “Liked” my Facebook photography page. Today is the last day to enter.  If you have already Liked the Page, you are already entered.  If you have not already done so, you can enter by clicking the link and hitting the Like button while logged in to your Facebook account, or you can do the same thing using my Facebook Fan Page widget to the right. I will pick one winner at random, tomorrow morning, and that person will have a choice of either getting a free copy of my not-quite-ready book, or a comparably priced print of his or her choice.  The book should be ready to go in about 2 weeks, and I hope to have an online preview ready to share with the winner on a sneak peek basis in a couple of days. The book will not include images from the Crosswalk or Bus Stop series, but will instead include my HDR images of New York City, usually devoid of people.