The HDR collaboration group in which I participate is back!  I previously hosted entries here and here and here and I hope to be posting a complete list of all collaboration posts on everyone’s websites soon. The participants this round are the usual crew of Mike “TheaterWiz” Criswell, Jimmy Denham, Scott Frederick, Jacques Gudé, Rob Hanson, and Bob Lussier (I feel like a talk show host). In addition, the last time I hosted I had the honor of introducing Scott for his first appearance in the group, and now I have the pleasure of introducing our latest addition, Mark “Silent G” Gvazdinskas. This is a nice way to return from my blog hiatus. I’m very glad I took the break. It was very refreshing, and perhaps the best part was not feeling the need to check my site stats constantly, which is something I hope to carry forward. On to the images, starting with my version followed by the gang in reverse-alphabetical order this time.

This Blackwell Lighthouse, on the north end of Roosevelt Island in the East River between Queens and Manhattan.  The image is looking roughly northeast up the East River towards Hellgate and Randalls Island, with the Triboro Bridge aka RFK Bridge in the distance. Astoria Queens is directly behind the lighthouse and across the water. Roosevelt Island was know as Welfare Island before it was renamed after FDR, and before that it was called Blackwell Island. This entry is going to get long enough, so I’ll cut short the history but you can follow links to Wikipedia for Roosevelt Island, Wikipedia for Blackwell Island Light, and Lighthouse Legends.

I created, by far, the darkest version of the image. Perhaps it’s because I remember how I had to squint when shooting directly into the sun, even if it was just barely peeking over the horizon and around the side of the lighthouse. I made certain that despite the darkness you can see the detail in the lovely brickwork that makes up the lighthouse. I also donated an image to the group that required some basic technical fixes. When I shot, due to lens distortion, the original image had the lighthouse sitting straight but the horizon was askew. I fixed both of those issues, and also eliminated some dust spots. I chose not to eliminate at least one ghosted seagull. Other than that, I tried to keep it simple. 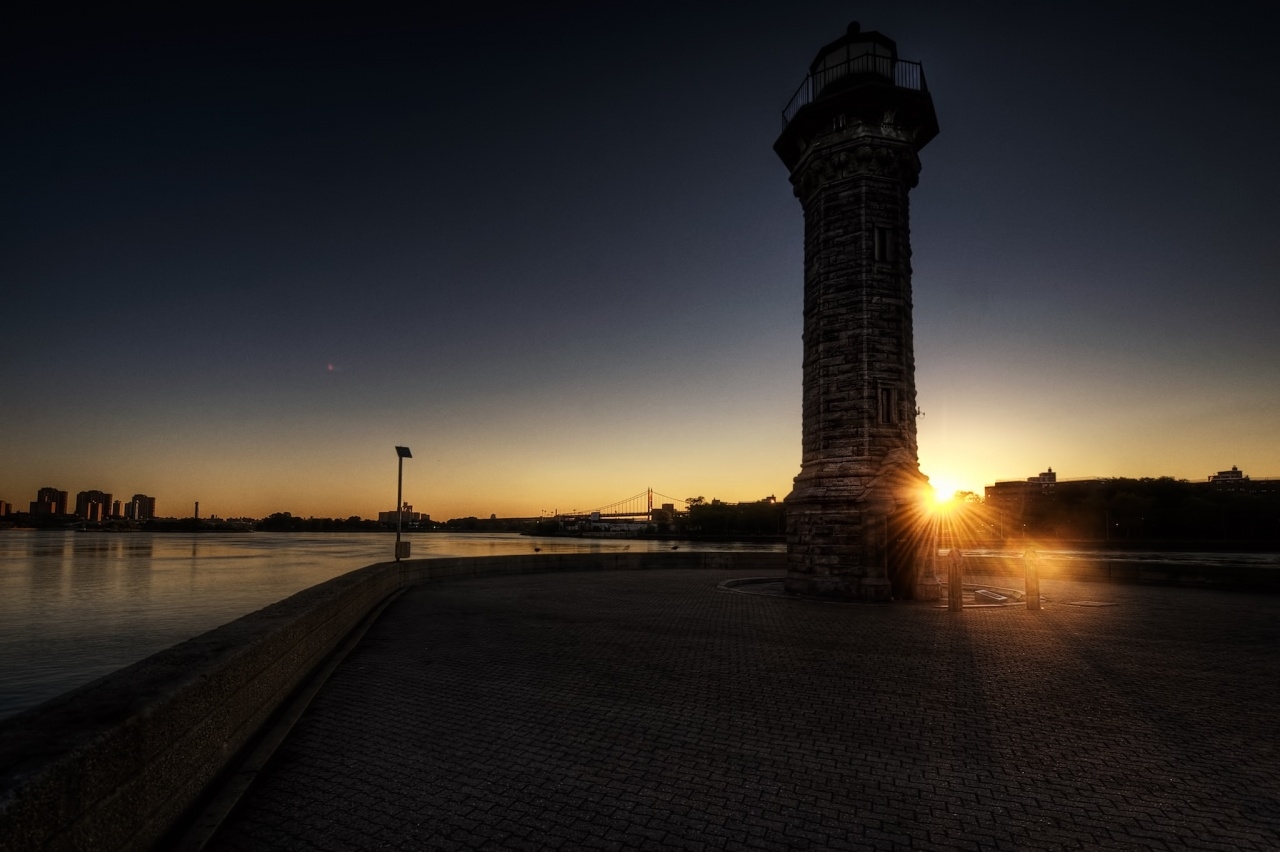 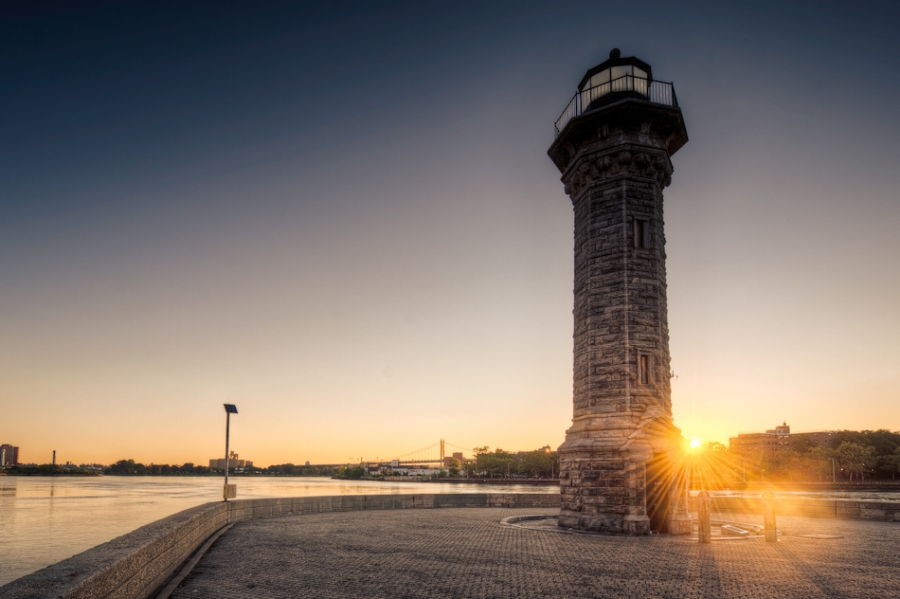 Thanks for the great lighthouse to play with, Mark! These structures tend to draw photographers like magnets and this one is no exception.

Added bonus, you shot it during the Golden hour.  I love the solar flare and the way the light makes the bridge in the background pop.

In processing this, I wanted to maintain the integrity of the original light. After running the brackets through Photomatix, I brought the image into onOne Phototools. I used two filters: Blue Dawn Leonidas to pull the blues back a bit and Golden Hour Enhancer to bring back some of the glow. 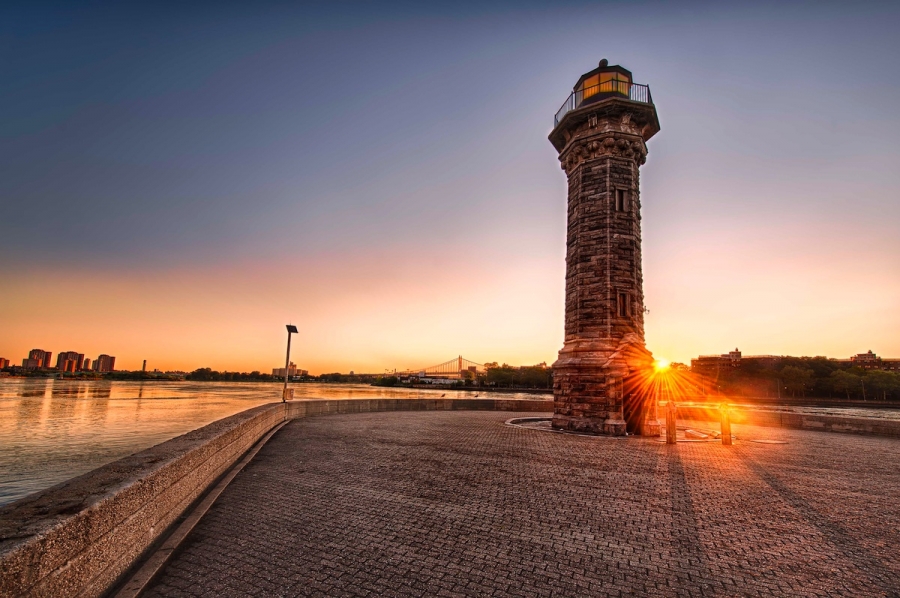 Thanks for the brackets, Mark. Since I’m not likely to be visiting NYC any time soon, you take me to places I never see.

For this round, I actually took a path I’m not accustomed to traveling – HDR Efex Pro from Nik Software. More often than not, I use HDR Express & 32 Float or Photomatix Pro (shaken, not stirred), but I found that Nik’s software produced the result I most wanted to use.  From that base, I did blend in parts from other programs, but only in homeopathic amounts.

I didn’t like the typically ‘soft’ output from Photomatix, so Nik’s ‘Structure’ slider helped clarify things quite a bit, along with an interesting High Pass filter technique I’ve been working with lately.  Toward the end, I wound up increasing saturation just a bit — it was a brilliantly clear sky, so the color needed a bit of juice.  While tonemapping brought out a lot of detail in the tower, I actually had to darken it a bit to make it look more realistic. (If you were staring into the sun, your eyes would not adjust well to the detail on the wall, so darkening made it seem more natural.) Balancing this just enough was a challenge. I felt that the glass at the top of the tower needed a bit more color, so I lit it up.

Dust spots, straightening the curves, and snuffing out a blurred seagull were some of the other things I worked over. All in all, I’m pretty happy with the result, and hope you enjoy it as well.  It was a great subject to work with. 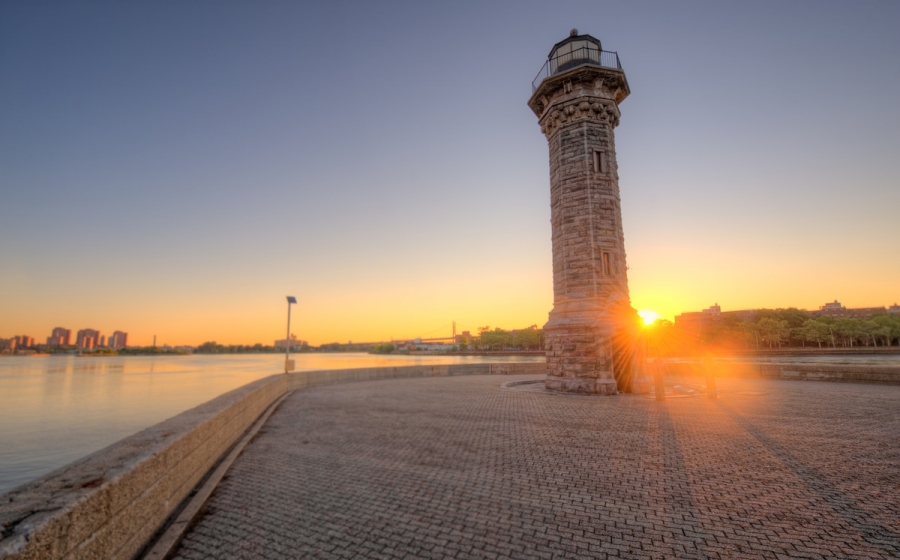 First, what an opportunity it was to work with such a talented crew of photographers! Thank you all so much for letting me participate in this round of the HDR Collaboration project and an extra big thanks to Mark for sharing. I’ve been following this project, along with these guys’ work, for quite some time now and finally worked up the nerve to ask Scott Frederick if I could try my hand at some Eastside brackets. This set was truly a treat to tackle. (I’d really love to go see this location some day!) The clear sky and exposed lighthouse definitely required some attention. This set went through Photomatix several times as I messed with different bracket combinations. I finally settled on a few of the brightest. Photomatix > Lightroom 3 > Nik Color Efex Pro for Pro Contrast, Brilliance and Warmth, Tonal Contrast and Glamour Glow (just a few filters…) > Focal Point 2 > Lightroom for finishing touches. All in all nothing like what these guys came up with but an absolute blast, nonetheless! Thanks again, Fellas! 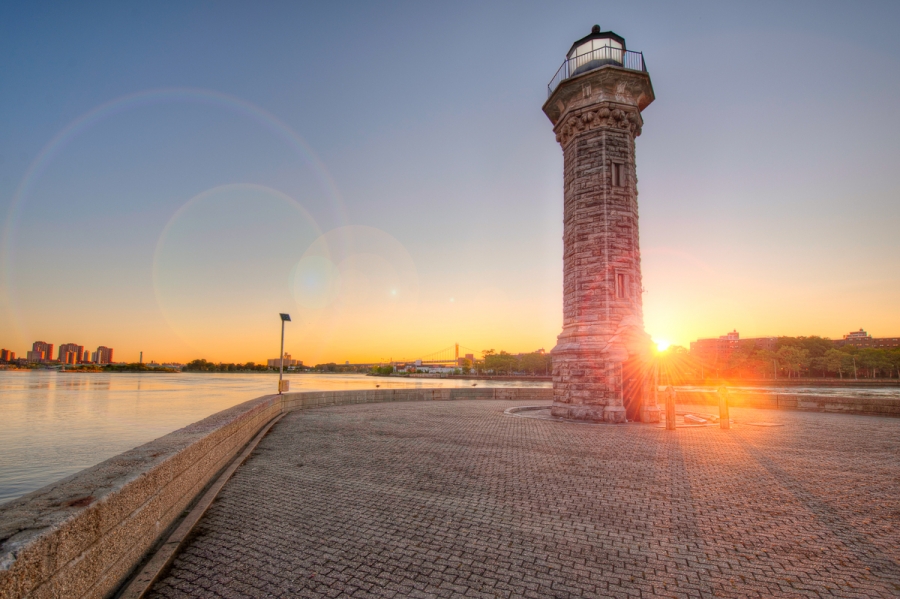 Man, oh man, Mark!  What a tasty set of brackets you gave us this time.  I can’t tell you how long I’ve wanted to shoot and work some fotofreqiness on a lighthouse, and while I did not take these myself, working these is the next best thing.  First thing I did with this one was to run a little lens “correction” on the shot to level the horizon a bit, and then adjust the perspective a tad.  Cleaned up some pesky dust spots, and then went to work.  After much experimentation with brackets over the last several weeks, I decided to toss all but the -2, -1, 0, +1 and +2 brackets, actually finding I got a cleaner results with this sunset shot that way.  In Photshop, I used the Nik Software Color Efex suite to get things to where you see them in this shot, and then added a lens flare for fun.  Thanks for sharing those great brackets with us, Mark! 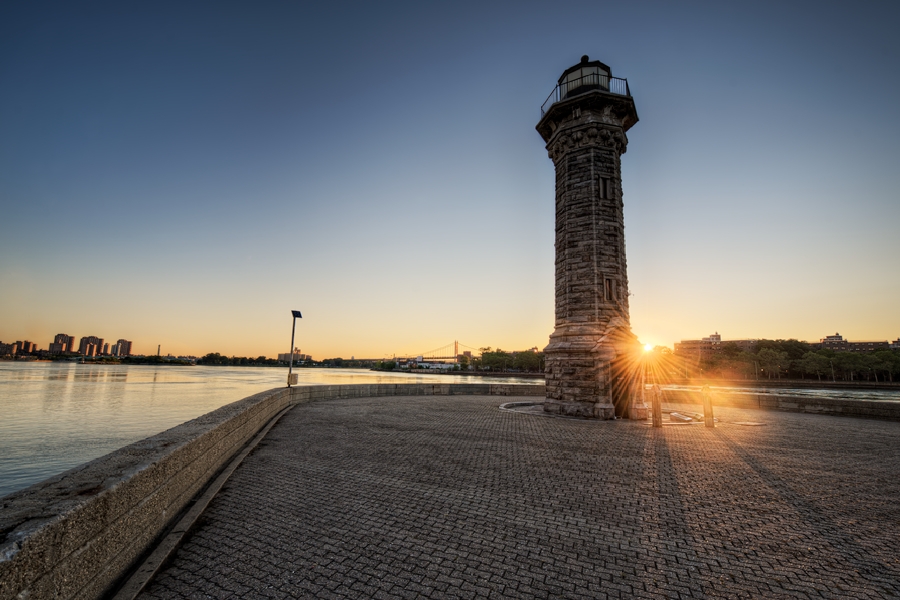 I really enjoyed working with this set and I wanted to thank Mark “OG” Garbowski for hosting this round!

Over the years, I’ve found that editing an image that was shot into the sun to be a difficult task, but I’ve learned that less is more when working with these types of captures.  I left the default strength around 70% while tone-mapping in Photomatix.  I also applied a few filters in PhotoTools like Blue Dawn Leonidas, Daily Multi-Vitamin and Golden Hour Enhancer.  Then I applied some tonal contrast with Nik’s Color Efex Pro.

Thank you for reading my little blurb as I look forward to the next round! 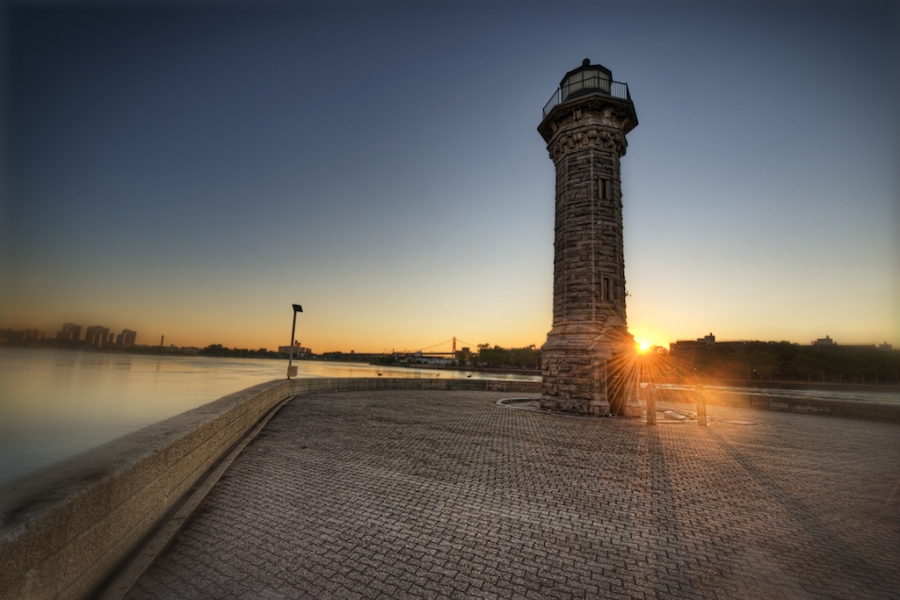 A big welcome to Mark “Silent G” Gvazdinskas! Looking forward to seeing your work within the group!

The other Mark G shared an AWESOME set of brackets with us this round and it was a whole lot of fun working on them! The sun flare really gave a dreamy feel to this frame and that’s the direction I took in processing. Focus was placed primarily on the lighthouse and the space immediately in front of it and used Focal Point to apply a blur around most of the outside. Tried to darken up the shadows but still keep detail on the house. After completed, I did notice the horizon line being a bit off, but thought it even added to the effect!

Thanks for sharing this great set with us Mark! Well done! 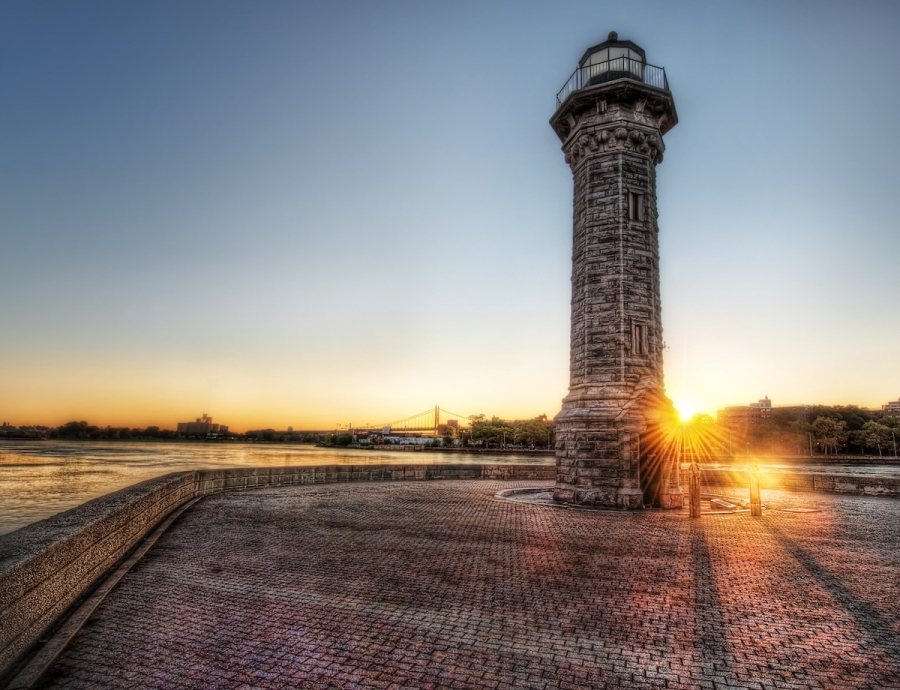 Thanks for the brackets Mark, quite challenging for sure, and a lighthouse I never knew existed, and a special welcome to the new member of our group “Silent G”!

I ran these through Photomatix to start, then quickly realized how challenging this set was. The sky was my biggest challenge, there was serious Halo’s no matter what I did when I got it to the look I liked. I had dig deep into my bag of processing tricks to get this where I wanted it without Halo’s, then the banding started….ugh!

I finally got to where I wanted to be, I tweaked everything with a bit of Topaz, some Nik and other treatments.

There were also a couple of distractions I opted to clean up, I used my anti seagull filter to remove a few ghosting birds. I also removed a light post that I did not like in the shot. I tweaked the lens distortion a bit and then cropped this to eliminate some buildings on the horizon that didn’t agree with me. Finishing touches were to add a slight darken/lighten center from Nik.

Thanks again for the brackets Mark! very nice flare!