Friday morning I was on Fifth Avenue and grabbed a quick image of the Empire State Building with my Fuji x100.  For unrelated reasons I had brought my iPad and Camera Connection Kit with me that day. Jest before I left work, I decided to edit the image into a color version and black and white version using Nik’s Snapseed App. I uploaded them to Google Plus and Instagram, and received a fair amount of positive feedback,especially on the black and white version. I liked it myself, and am generally very happy with the Snapseed app, although I did notice a bit of haloing along the edge of the building in the top right of the image that there was no way to remove within Snapseed (at least that I am aware of).

So I decided to run a quick comparison test of Snapseed against its older sister/brother/cousin Silver Efex Pro 2, and also against Apple’s Aperture.  What I tried to do was recreate basically the same look in all three applications, but without looking back at earlier versions while I worked on each new one. So, let’s take them in the order I made them. First up is the Snapseed version. 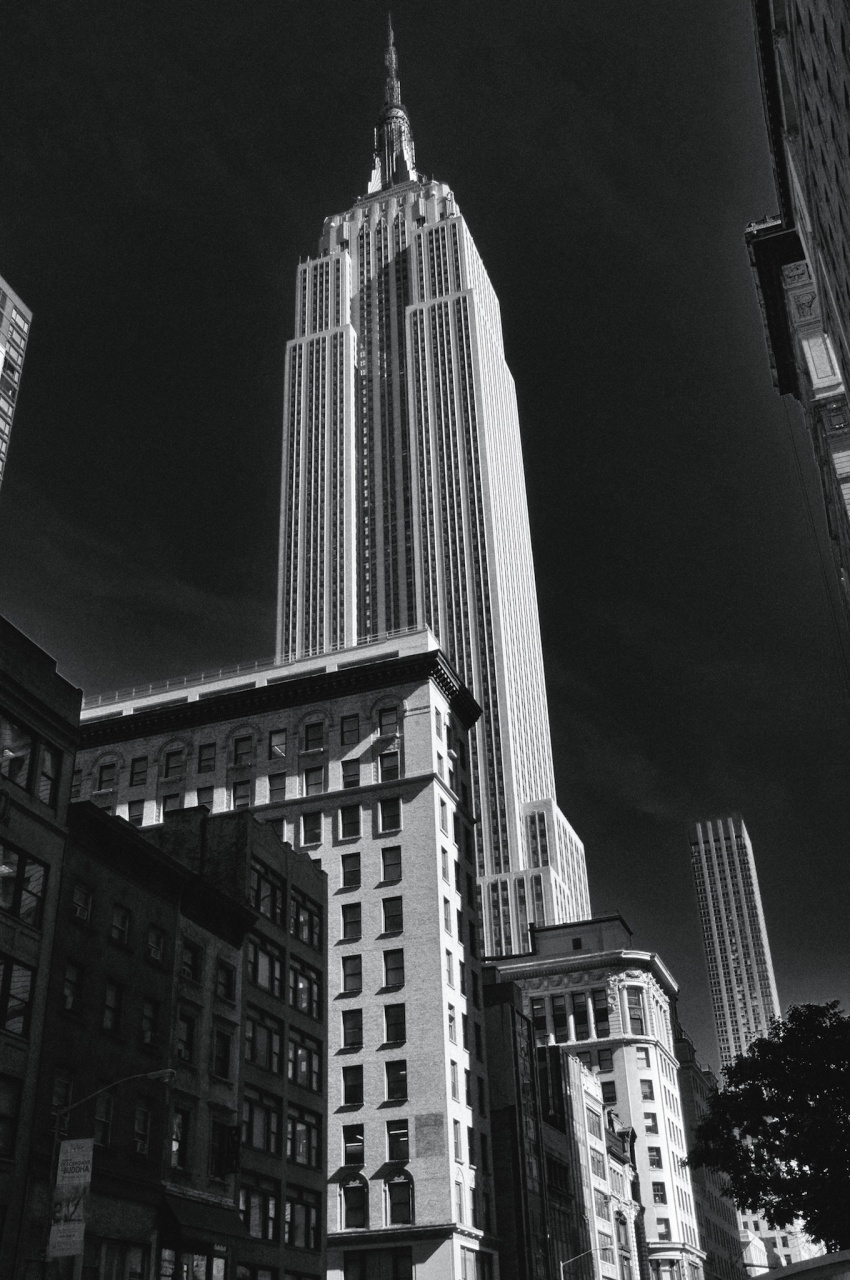 For this first version I wanted to get the blue sky really dark, to make the Empire State Building really stand out. Snapseed doesn’t have any tools directly capable of selectively adjusting a blue sky within the black and white module, but one of its presets came pretty close to the look I wanted. After applying it however, the buildings in the bottom left foreground and top right were completely black, which I did not want. There was no way to address this from within the Black and White Snapseed module, so I exited without saving and opened the image first in the Selective Adjust module. This allows you to pick specific areas of the image to adjust. I started with the foreground buildings, and boosted brightness and contrast within that limited ares. Note that boosting contrast in the image overall would have only made the buildings darker, but boosting contrast within the buildings brought their features into greater detail. I then saved and exited that module, leaving me with a unnatural looking temporary result. But, when I brought that version into the black and white module and applied the same preset, I got the look I wanted. I made a couple of tweaks. and noticed the previously mentioned haloing, but was mostly happy with the result and posted it as noted above. 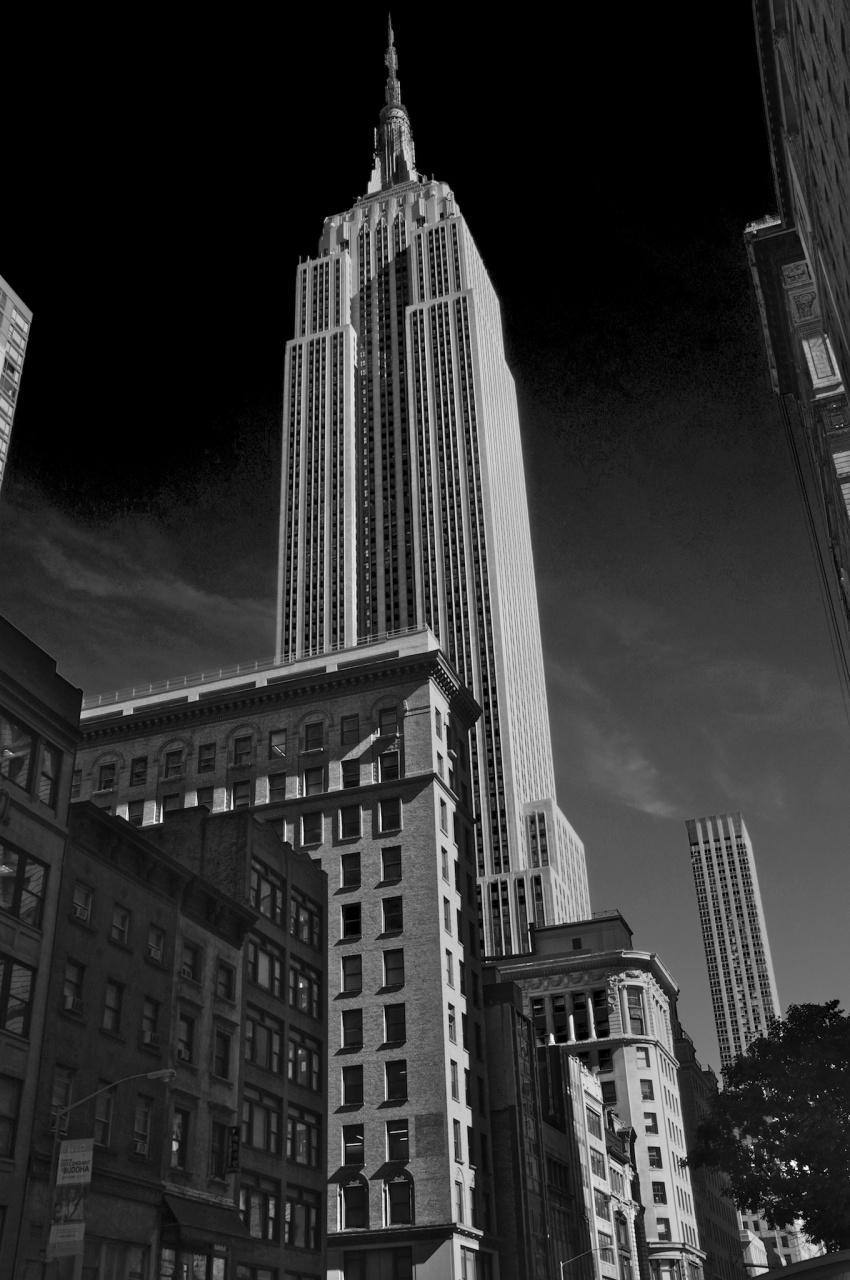 So here I tried to do the same thing. First I applied a basic black and white adjustment. From there, Aperture allows you to adjust the brightness of the red, green, and blue color spaces separately. I brought the blue slider all the way to dark, and that made the sky nearly black except for near the horizon, but I needed a bit more so I also lowered the exposure a bit. I had the same issue with the dark buildings, and found that the Shadow adjustment worked perfectly, It was smart enough to know that the sky, although dark and nearly black, was not in shadow, so it brought out the detail in the buildings without ruining what I did to the sky. Then I brushed in some detail to the buildings, and added a simple S-curve to add overall contrast and was finished. 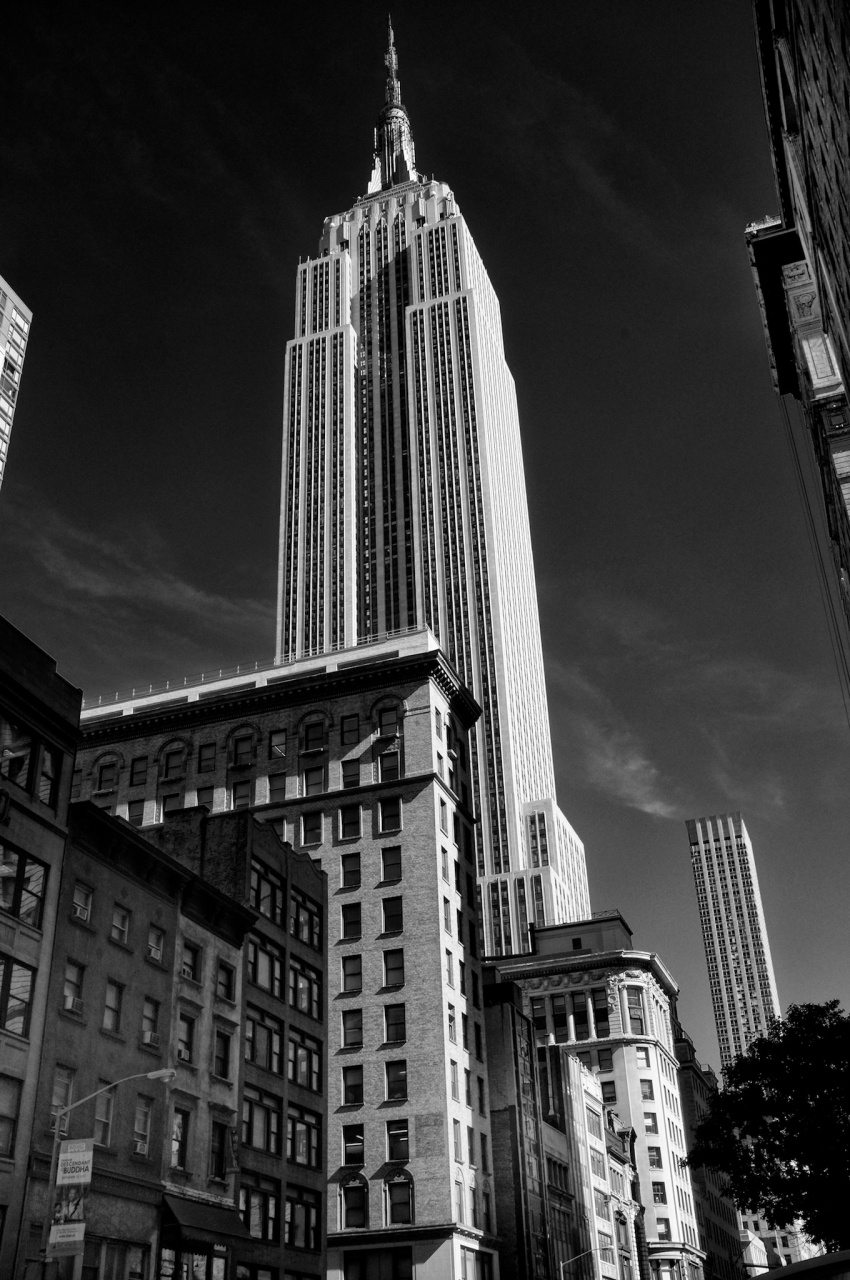 My best tool for darkening the sky here was to apply a red filter. I need to learn more about the optics before I can explain why, but I do know that applying a red filter makes blues darker, and applying a blue filter makes blues very light, almost white. I’m a bit surprised that Silver Efex does not have the RGB controls that Aperture does, although it has lots of other options. After bringing the brightness down a bit I again had to address the nearly black buildings, and this time I could use the selective point control I used in Snapseed with Silver Efex Pro itself. I tried using the Shadows slider as I had in Aperture, but in this case it was not smart enough to realize that the nearly black sky I had just created was not a shadow to be adjusted, so fixing the buildings destroyed the effect I wanted in the sky. But the adjustment points worked fine so no harm no foul. I opted to mimic a 25 ISO film to add just a smidgen of grain and saved the result above.

For $4.99, Snapseed is an amazingly powerful tool. It does a lot more than black and white, and it does it all well, although the haloing issue does indicate it has some limitations, which I consider understandable for an inexpensive app that allows you to do amazing Photo editing on an iPad. Besides the haloing, I notice that the Snapseed lost the clouds in the sky that were accentuated a bit in both the Aperture and Silver Efex versions.

Between Aperture and Silver Efex Pro, I see little difference here. It was actually a bit easier to create the Aperture version because of the way the shadows adjustment worked, but that was not a major difference. I should also note that there are some images where the additional tools afforded by Silver Efex Pro will allow you to create looks unavailable in Aperture, even though this was not one of them (except perhaps for the film grain, which I cannot really create within Aperture). Also, although I did not play in Lightroom here, I’m certain it could have done at least as well as Aperturee did on the black and white conversion. I can recommend Silver Efex Pro, but I suggest you first learn how to adjust black and white conversions using the basic editing tools you might already have before adding that plugin to your set of tools.

Oh, and one more thing. All of this was done to a JPEG, as I wasn’t shooting RAW that day. RAW is great, but don’t assume that just because you shot JPEG you cannot make many meaningful adjustments in post.