I didn’t tell my collaborators, but I had second thoughts about selecting this image for our project almost as soon as I offered it. It’s a fine image I’m proud of, but it only gets marginal benefit out of an HDR treatment, and I was not sure it would lend itself to very many varied and creative interpretations. I’m glad to reveal this now that my worries were unfounded.

This is a statue of a lion (obviously), in Abe Lebewohl Park in front of St. Mark’s Church in the Bowery. The church is about a block away from St. Mark’s Place, the legendary hipster bohemian street in the East Village that I featured in a lot of images last fall.

Meanwhile, the park is named for a Jewish Polish refugee with an amazing history. His life history has little to do with the image, but it is so amazing that I want to help spread it. Combining and summarizing the story from those 2 links, Abe Lebewohl was born in Poland. His father was convicted of being a capitalist when the Soviets invaded and conquered western Poland at the start of WWII. His Dad was sent to the gulag in Siberia, where he met Menachem Begin, later Prime Minister of Israel, while Abe and his mother were exiled to Kazakhstan. Eventually they reunited near the end of the war. As bad as all of that was, it is possible that the time they were forced to spend in Siberia and Kazakhstan saved them from the Nazis and the Holocaust.

They moved to Soviet-occupied Poland shortly after WWII, and soon illegally escaped through Austria to Italy, where they spend a few years. They planned to emigrate to British-occupied Palestine and join the Zionist movement that led to the founding of Israel. His father, partly because of the influence of Begin and partly because they had had to flee almost every country in Europe, was an enthusiastic Zionist. But after all they had endured, Abe’s mother could not bear to think that her son would have to join the inevitable wars for Israeli independence and security. So, instead, they made their way to America in 1950. Abe’s first job was as a soda jerk in Coney Island. In 1954 he purchased the ownership of a small deli, which he grew. It eventually became world famous — the Second Avenue Deli. He was a legend in the East Village, known for his community support and generosity. Then, in 1995, he was killed in a robbery as he deposited his daily receipts at a bank. Because he was such a giant in his community, they had to shut down several streets for his funeral. The triangular park in front of the Church was named in Abe’s honor shortly after his death. As far as I know, his murder remains unsolved.

Anyway, back to the statue. So far I cannot discover the lion statue’s history. A lion, usually winged, is the traditional symbol of St. Mark. This statue has no wings, and so may or may not be connected to the church somehow. It sits in a public park, and I don’t know if the statue was placed by the church before the city claimed the land for a park, or what. Still, my working assumption is that it is meant to represent the Saint. The shield seems to be a graffiti magnet, and photos online show it sometimes clean, sometimes with unauthorized text. I added the rain, which I almost would never had done if this were not a collaboration post. It seemed to emphasize the idea that the lion is a guardian and sentinel. Being named after St. Mark, I feel a strong affinity for this image.

One final note, I tried to concoct some grand unified theory to connect all of the elements in the image (“Abe Lebewohl had a lion’s heart and courage”). It never did quite come together, but I did notice that a lot of Lou Reed songs, including many from his Velvet Underground days, have themes and song titles that are not only spiritual but even include religious and specifically Christian elements. Based just on the titles, they could be hymns: Beginning to See the Light, I Found A Reason, I’m Waitin’ For The Man, Jesus, Sunday Morning, Busload of Faith. I realize the actual lyrics are often about something else but it seems notable anyway.*

* Actually the very brief lyrics to “Jesus” are a straightforward plea for grace and redemption.

So that’s a very long introduction to the other very strong versions of this image. 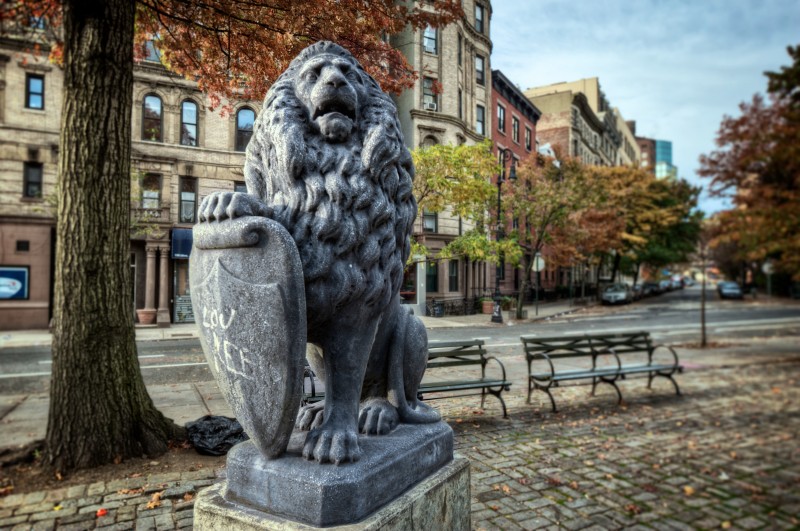 What a treat of an image to work on this round! Thanks Mark for sharing such a great set of brackets and the back story surrounding the park this awesome statue resides in. Very cool! Great setting with the fall colors, beautiful neighborhood, brick walkway and this amazing statue. As much as I loved the rest of the setting, I wanted the lion to standout, almost as if it was 3D. A luminosity blending mode was used with the Chrome preset in Perfect Effects to bring out some of the textures in the lion and the walkway. Added a cooling effect only to the lion to give him a bluish tint and applied a planar focus bug in Focal Point to make him jump out a bit. Simple, but I like it. Thanks for letting us play along Mark – what a treat indeed! 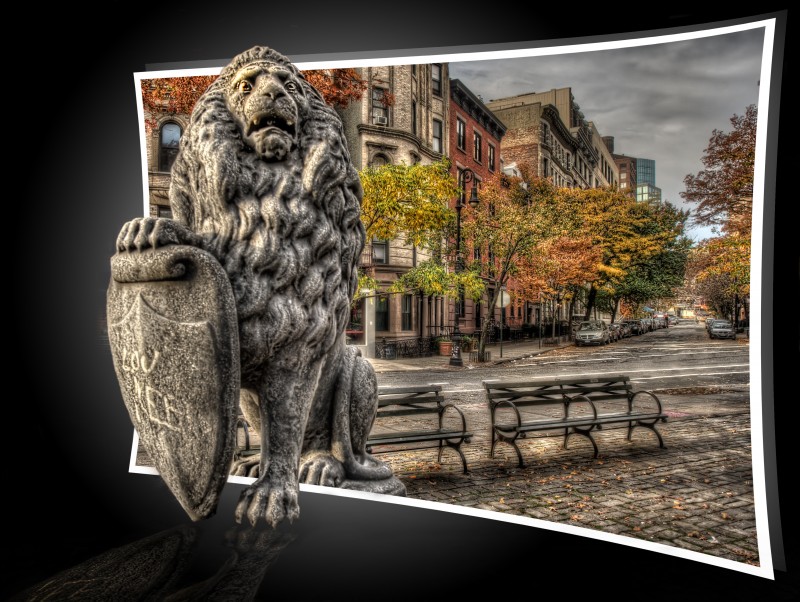 Thanks for the great NYC scene Mark, it must be a real treat to have all that culture so near and to be able to photograph it on a regular basis, great story as well. I ran the set through Photomatix and started processing then I really got stuck. I did not know where I wanted to go with it, so I left it for a day. I came back looking at this shot in a real creative mood, it hit me that the Out of Bounds effect (OOB) would work great on making the lion stand out the way I wanted, so I rolled with it. I did some normal tricks on the main scene and tweaked and removed a couple of distractions before making the OOB stand out, hope it wasn’t too much, I really had fun with this set when it was all said and done. Thanks again Mark! 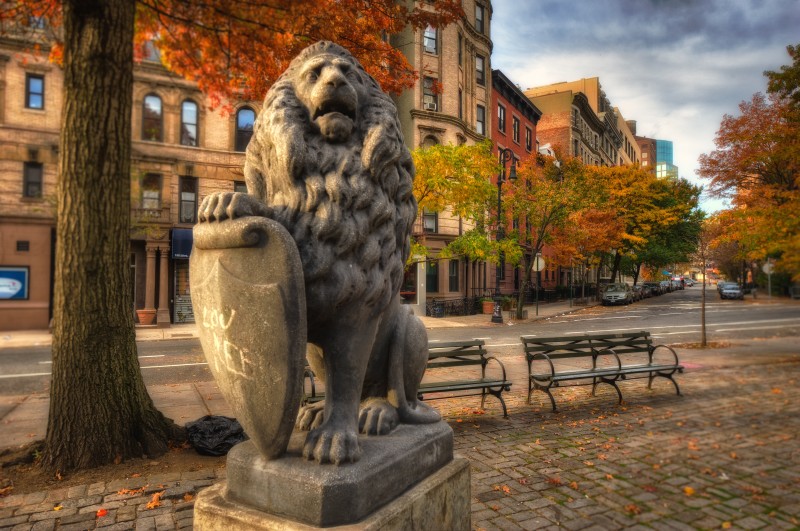 What an incredible set to work on–Lou Reed tag?! Thanks so much, Mark!! I dream of shooting locations like this and the fall colors are perfect. This was a pretty simple edit for me–honestly I could’ve done a slight exposure compensation on a middle bracket and called it good–that’s how much I loved the composition and setting. Just a quick blur, temperature play and some glow to give that bounce light feel. Thanks again for letting us get down on such an ideal set. Have a great week! 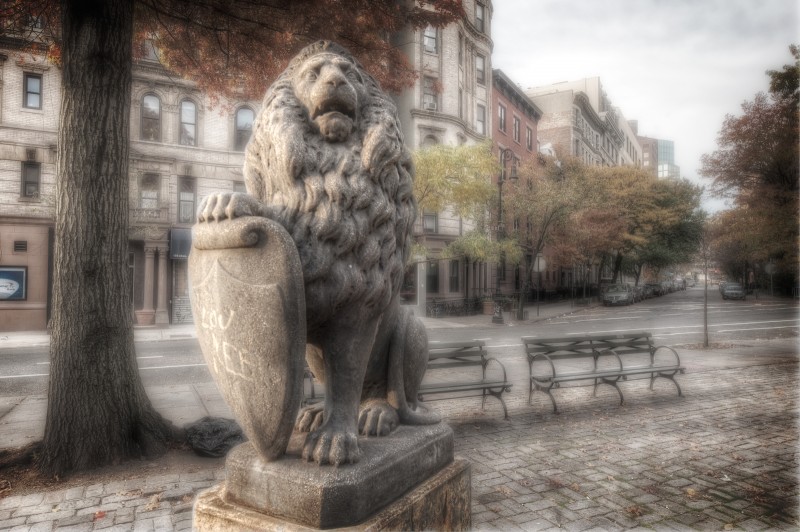 Thanks for a great image to play with, Mark!

My initial intention was to play on the fall colors but after playing around in onOne’s Perfect Photo Suite, I went in the other direction. I softened the image overall, pulled back the colors a bit and applied a glow. I then masked the glow out of the statue to bring bring it out. I don’t know … Lou Reed emblazoned on a lion’s shield seemed kinda mythical to me. I though this approach fit the bill. 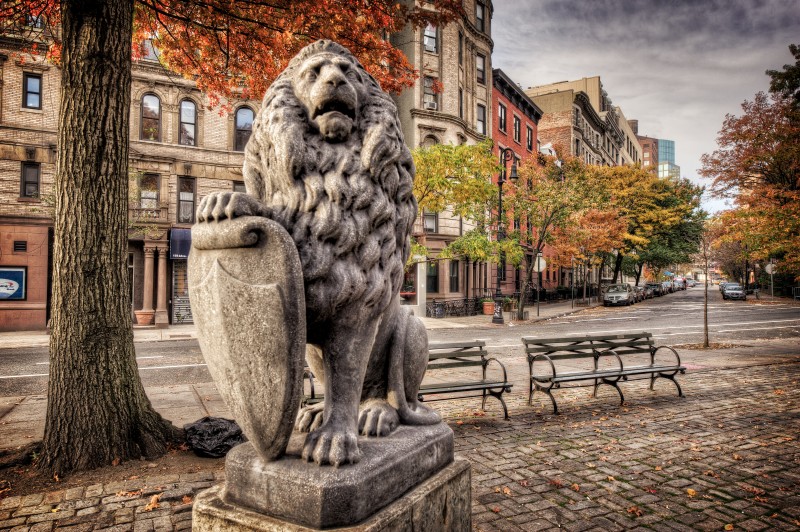 Thanks Mark for providing us with a great set of brackets to work with on this round.  I love the composition of this fall image and wanted to keep the colors vibrant but not over cooked! I applied the Pastel Colors filter in Perfect Effects 3 along with some Golden Hour Enhancer and a vignette 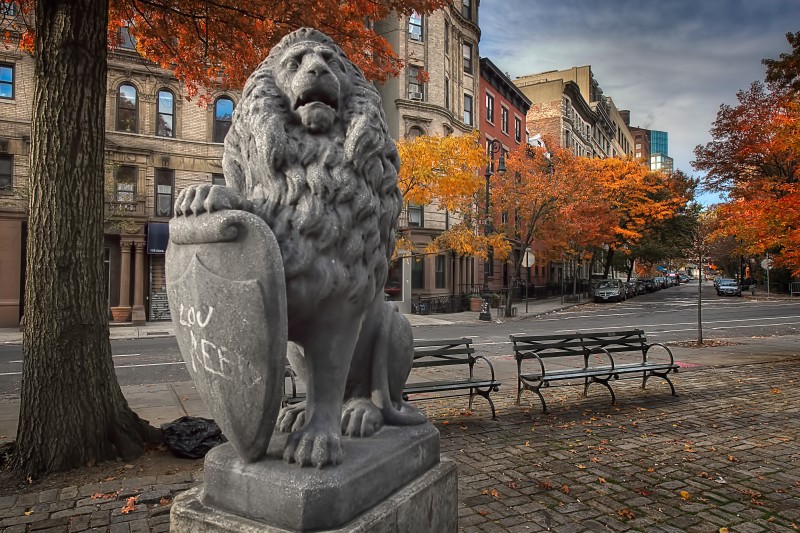 I really enjoyed working on this set of brackets, Mark. The scene was well composed and nicely captured.

Having noticed the fallen leaves on the sidewalk, I couldn’t resist making the scene feel even more autumn-like, so I sent the leaves on the trees forward by about two weeks. The sky was a bit flat in the originals, so I tried my best to boost that a bit in order to match the autumn mood. I also did a slight crop on the left side in order to bring the lion to a third-point.

Other than that, I just let the details speak for themselves, using a bit of detail extraction and darkening in areas to draw the eye to the subject, without occluding too much information. When the original frames are so good, I’m not compelled to alter much that is already there.

Unfortunately, sooner or later I must stop messing around in post-processing. I’ll surely miss working on this one!  Thanks for providing another great NYC scene, Mark

A Question of Expressiveness

Looking Back – The Bubbles At Jordan Pond