Look at their faces, of course. But then concentrate on their hands. And then answer for yourself the question of which is more expressive. As I mentioned yesterday, I am…

Sorry for missing yesterday's post. I 'm having a busy week. Today's image is one from roughly 18 months ago, which I picked today precisely because it required little work…

I spent all weekend organizing info for my taxes. I also meant all weekend to take a break and take some close-up shots of the inside of our piano,…

One of those titles that just writes itself.  First full day of Spring today, and it's about 30-32 degrees, with some light slushy snow falling. I'm ready for that mythical…

A somewhat old photo from the archives.  Lately I've been playing around a lot with the color slider controls in both Aperture and Lightroom. I don't really know what i'm…

This is a path leading from the Central Park drive up towards the Strawberry Fields/Imagine Mosaic.  It snowed again last night. We haven't had much in the way of…

Photograph of Lisianthus Mariachi Carmine taken at the hothouse at Mohonk Mountain House.

I don't know much about this place, except that it is commonly described as a former "dockside hotel" dating back to the days when Hoboken was an active port town.… 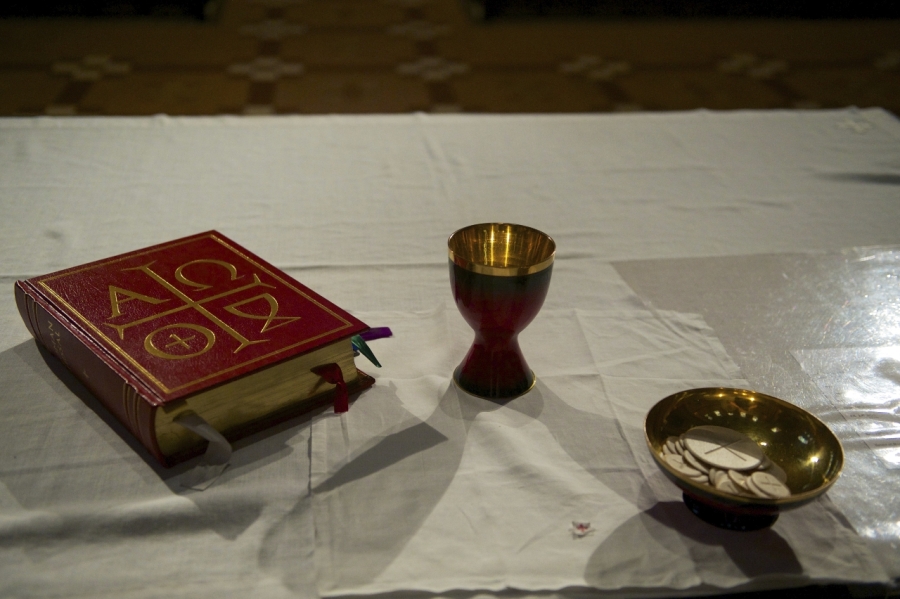 It’s hardly news at this point that the world has a new Pope, the first Pope Francis. It did seem fitting today to post some church photos. When I had the opportunity to shoot St. Mary’s Church in Yonkers, Msgr. Corrigan was kind enough to place some unconsecrated communion wafers, water and wine on the Altar for me.

Being unconsecrated, the bread and wine here are non-controversially just that: bread and wine. It’s what happens at Mass that causes so much dispute, and quite frankly a fair amount of confusion. Catholics believe that the substance of the bread and wine used in the sacrament of the Eucharist literally become the body and blood of Jesus, while retaining all of the outer characteristics of bread and wine in ways that are accessible to our senses. If that seems odd or confusing, take solace in the fact that it is officially considered a Mystery.

Some Protestant sects, e.g., some Anglicans, believe in consubstantiation, or that the Eucharistic bread and wine shares the substance of both bread and wine and the body and blood of Christ. A meaningful difference, but this still holds substantial overlap with Catholic belief.  Probably the most common Protestant belief is known as sacramental union or the Real Presence, a concept developed by Martin Luther himself, and which I do not understand well enough to summarize briefly. Related also, but different again, is another doctrine known as transignification. Finally, memorialism or symbolism holds that the bread and wine are no more than symbols. Then, of course, you have the universe of non-Christians, who hold all sorts of ideas ranging from the belief that this is evidence of a weak, superstitious mind, to a misguided belief in a false god, and all sorts of other possibilities.

The title of a post comes from a letter written by American Southern author Flannery O’Connor. Describing a party she attended, she describes how one guest, a former Catholic, proceeded to describe her view of the Eucharist, including her current belief as believing it to be a symbol, albeit a “pretty good” one. To which O’Connor replied: “Well, if it’s a symbol, to hell with it.” In her letter she goes on to explain, “That was all the defense I was capable of but I realize now that this is all I will ever be able to say about it, outside of a story, except that it is the center of existence for me; all the rest of life is expendable.”

I suspect most people consider that either profound and beautiful, or rather absurd. It is, after all, a Mystery. More photos below the fold.

END_OF_DOCUMENT_TOKEN_TO_BE_REPLACED

This is the smaller section of The Lake in Central Park, on the east side of the Bow Bridge, which is slight to the left and behind this point of…

This tower sits on a ridge above the Manhattan anchorage of the High Bridge. The High Bridge is an aqueduct/pedestrian bridge spanning the Harlem River at roughly 174th Street, that was…

This is an image from last Spring. April 2012, to be more specific.  Today it's snowing. I'm so ready for Spring. That's the Verrazano Bridge in the distance, with what…

This has been a troublesome image to get right, and I don't think I've quite managed, but it's time to put something out there and move on.  It's much easier…

Sorry to have missed posting for a couple of days. I was sick and my Mom is in the hospital (doing well, thanks), and the combination turned my life and…