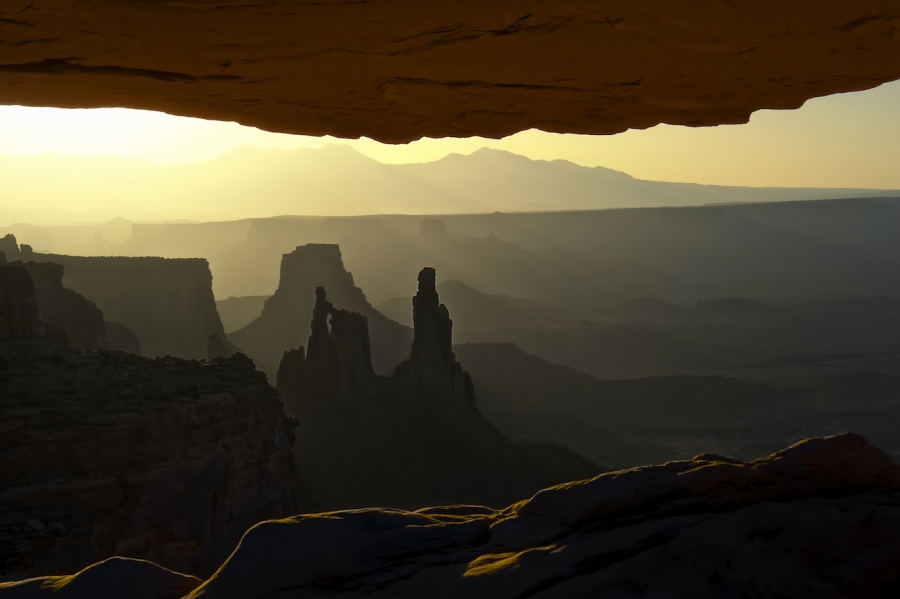 I confess that I was unfamiliar with the use of the word “recession” in photography until two days ago, when I viewed this blog post from Dave Wilson, and I noticed that he tagged it with the word “recession.”  For a moment I thought “what the heck does this have to do with the economy?” But then I clicked the “recession” tag link,  and although Dave had only one other image with the recession tag it became immediately apparent what effect it refers to.  If you do not know or cannot guess, it is the layered effect of different shades of light and color in an image. Although I had never heard of it, I was nonetheless familiar with the look, and had in fact created several images with the look during the same trip as Dave. I also now know that the complete term is “tonal recession,” which at least differentiates it from economic news.

This shot is from Mesa Arch, looking out over Canyonlands National Park, maybe 20-30 minutes after the sun appeared over those peaks in the distance. I will post an image or two from that moment some day, but this is a nice start to the series of images from that morning. Mesa Arch, by the way, is very busy at dawn. We awoke at 4 am, were out the door by 4:30, and yet when we arrived the place looked pretty much like this: 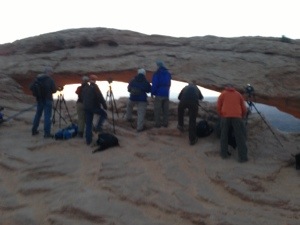 To be fair, it was actually just a bit less crowded than that when we arrived, as this includes a couple of folks from my group, but you get the point. And from what I gather it looks like this pretty much every nice day around dawn, and especially so on weekends. My tripod was set up just to the right of this little image.  By the time I took the primary image above the area had cleared out. Our group of 7 comprised the only people left there, and we were able to move around and in and out of the arch to get a variety of photos.  The one above was taken hand held, which made it easier to move around for different looks, and the tripod did not add that much value in full daylight.