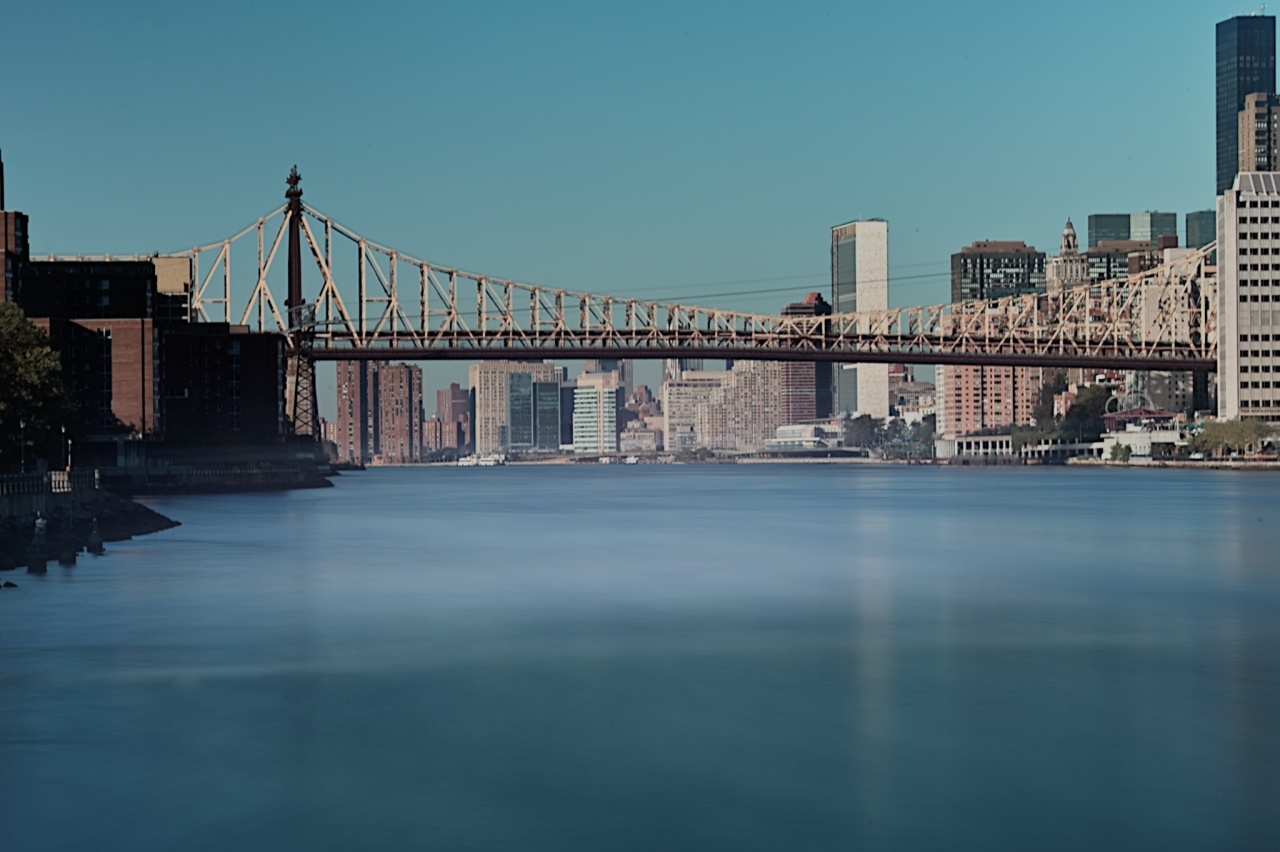 This is Manhattan, on both sides of the river. Sort of, technically, but not really.

This morning I ventured to Roosevelt Island, which is a long narrow island in the East River between Manhattan and Queens. For jurisdictional purposes it is a part of the borough of Manhattan and New York County, but apart fro maybe winning a bar bet (and likely causing an argument) I see no real reason to consider it a part of Manhattan. It is clearly its own place. I spent 2 hours there and even though it is not very large, I barely scratched about 1/4 of its edge from its northern tip to part way down its west coast. I might actually go back tomorrow morning.

This is a long exposure — about 1 minute 21 seconds — taken with a neutral density filter. I have the Singh-Ray Variable neutral Density (or Vari_ND) as they call it. It can shift from blocking light anywhere from 2 stops to 8 stops just by turning it like a polarizing filter, which is pretty cool, but I’ve had trouble with it. So I spent some time working with it this morning, and because its entire point is to allow long exposures, I do mean I spent some time.* So even though I do not consider this the best example of long tim exposure water photography, I’m presenting it because I did manage to overcome of the issues I have bene having. It does appear that the Vari ND does work better on some lenses than others. In particular, I seem to be unable to get a satisfactory result using it with my Nikkor 24mm PC-E (the tilt shift) lens. This is true even when I’m not using the tilt or shift feature of the lens. That combination of filter and lens tends to generate a nasty color shift that smears across the image irregularly. Singh_Ray stands behind their products and does encourage you to send problem filters back, but I had mine too long before I noticed the issue.

In any event, I did get some shots that worked out using the filter, and this is probably the best. I produced both this and a black and white version which I might also share, maybe even tomorrow.

Another use for it is simply to allow reasonable length exposures in extremely bright light at your chosen aperture. On a very sunny day, for example, you might want to shoot wide open to get nice bokeh, but it might not be possible to get a correct exposure, even at the lowest ISO setting, when your aperture is set to 2.8 or wider. An ND filter can give you the flexibility to shoot at your desired aperture eve if you are not looking to capture motion with a long exposure.