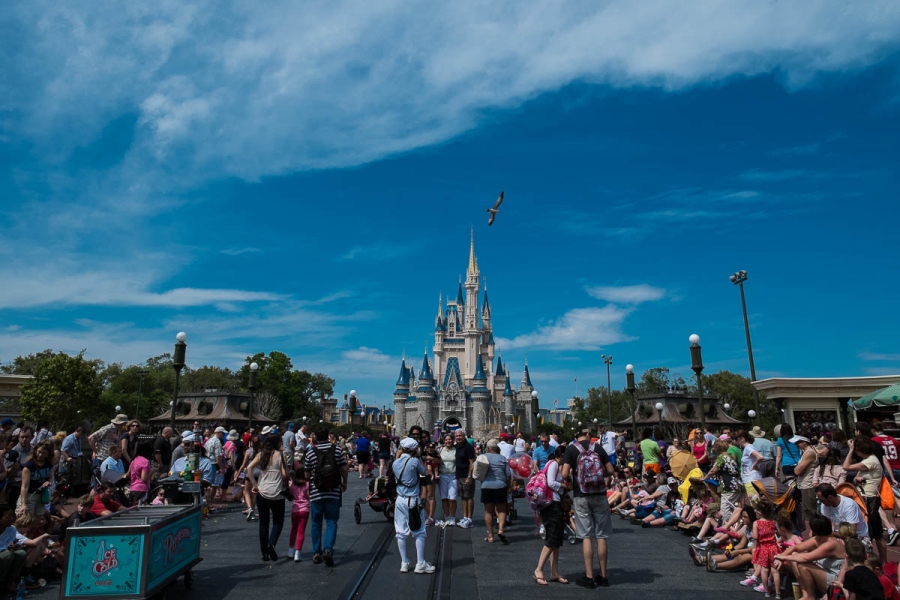 Usually when my family goes to Walt Disney World, we don’t decide which parks to visit each day until we get there. Then we check the schedules, weather and other factors and plan our week. But this year we visited during Easter Week, and we were fairly certain we would visit the Magic Kingdom on Easter Sunday itself. We just figured that Disney would do Easter right on Main Street, and we weren’t disappointed. I have a set of photos ready to go, some with images of the Easter-themed parade down Main Street, but as a last minute decision I decided this shot stood on its own.

Could you ask for a more beautiful day? Blue skies with just the right amount of clouds to make things interesting. It was hot enough to eat ice cream, but not unpleasant. And the bird — how perfect is that? It would be awesome to get a shot like this without the crowds, but I cannot imagine how one would do so unless hired by Disney to do a special shoot. It could be done at night just after closing, but I don’t think it could be done during the day. But what is WDW without the guests, anyway? Just an off sort of movie set, really.

This was moments after a parade ended. The folks lined up on either side of the road just haven’t gotten up yet, and maybe they’re waiting for the next one. It seemed they had a parade every 20-30 minutes that day. Oh, and when I finally retire from the law, I have half a mind to move to Orlando and get a part time job working as one of Disney’s WDW Park Photographers.  I’d even wear the outfit.

Taken with the Fuji X-E1 and the 14mm F/28 Wide Angle. Raw file processed in Lightroom.

Washed Out Diner on Route 17